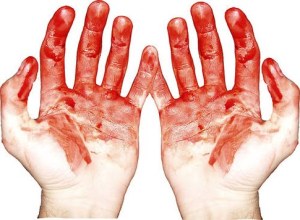 3 When Judas, who had betrayed him, saw that Jesus was condemned, he was seized with remorse and returned the thirty silver coins to the chief priests and the elders.         4 “I have sinned,” he said, “for I have betrayed innocent blood.” (Matthew 27:3-4)

19 While Pilate was sitting on the judge’s seat, his wife sent him this message: “Don’t have anything to do with that innocent man, for I have suffered a great deal today in a dream because of him.” (Matthew 27:19)

24 When Pilate saw that he was getting nowhere, but that instead an uproar was starting, he took water and washed his hands in front of the crowd. “I am innocent of this man’s blood,” he said. “It is your responsibility!” 25 All the people answered, “Let his blood be on us and on our children!” (Mathew 27:24-25)

The ‘Scarlet Thread of Redemption’ that runs through the Bible traces our need for an innocent blood sacrifice which God ultimately provides in Jesus Christ. As I read through the account of Christ’s Passion in Matthew 27, the ‘Scarlet Thread’ becomes so clear and obvious. Judas the betrayer is broken by regret and remorse over what he knows to be true: Jesus was an innocent man whom he has now handed over to be sacrificed. Pilate’s wife is given some kind of dream (presumably by God) where she is haunted by the thought that the Jews want her husband to sacrifice an innocent man. Pilate fears this, and yet his fear of the crowds is greater. So he tries (unsuccessfully) to remove his guilt by publicly washing his hands, declaring “I am innocent of this man’s blood” – as if that would really remove his culpability for ordering the sacrifice of a man he knows to be innocent. The crowds respond, “Let his blood be on us…” – pridefully acknowledging their guilt in the sacrifice of an innocent man. What a horrible and almost incomprehensible scene! Yet, the ‘Scarlet Thread of Redemption’ helps us see that all of this that Jesus Christ was “delivered up by the predetermined plan and foreknowledge of God” (Acts 2:23). It was how God in His great love for us determined that He would provide an innocent blood sacrifice to cover our sin, grant us forgiveness, and restore our relationship with Him.